Perceptual systems an inexhaustible reservoir of information and the importance of art.

Available from SP Books  and  Amazon 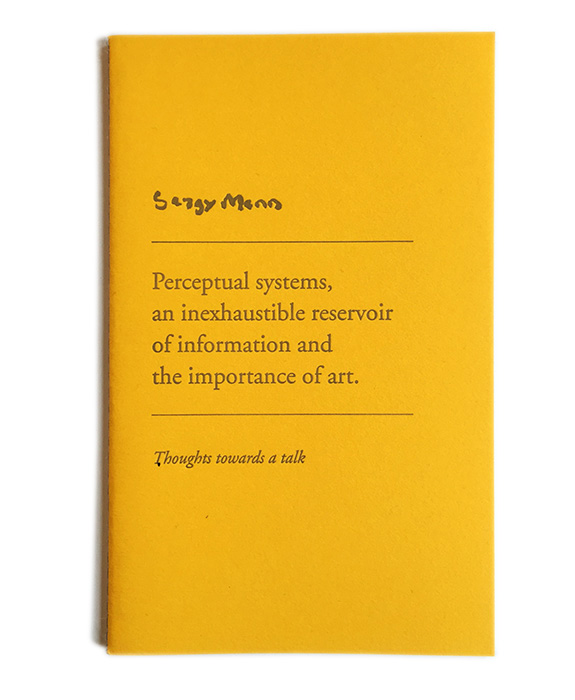 In the last months of his life Sargy Mann was working on a talk, which he was scheduled to give in London in May 2015.  In early 2015 he had two or three drafts, each with a very different emphasis and he was still coming up with new ideas. He died in April 2015. The talk was never finished but he had continued working on it or ideas that had come out of the process until the very end. This publication is not a version of the talk Sargy would have given. It is an attempt to combine all of the ideas he had been working on, from the various versions, into one extended essay. The quote below is Sargy Mann’s attempt to sum up what he was working on, taken from the film More Different Better, which can be seen here.

“There is my developing experience as a painter going blind which is unusual and interesting and as you know I am interested in that. But I am equally interested, possibly more interested in a conception of what figurative art can be as a way of mining new experience and in some sense or other recording it so it’s communicable. Now essentially all my drafts are trying to put those two together and it seems at first like a paradox, but it’s a paradox that I think I can perfectly resolve… and it’s what I want to do… the third element which is very hard to separate from the other two, is the perceptual learning applied to the perceptual systems, made possible through consciousness… That does require an analysis to do with things to do with the anatomy of the eye and the brain, which most people haven’t got a clue about but which is absolutely crucial. “