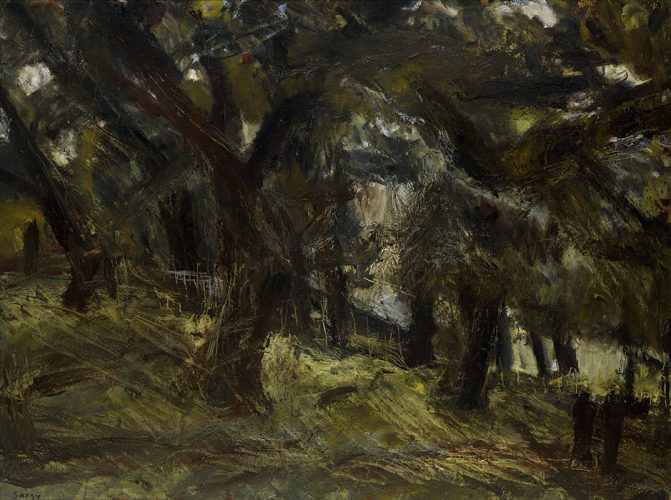 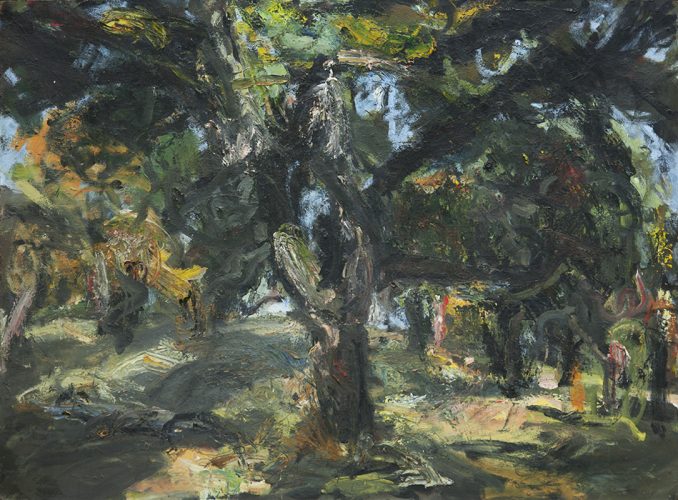 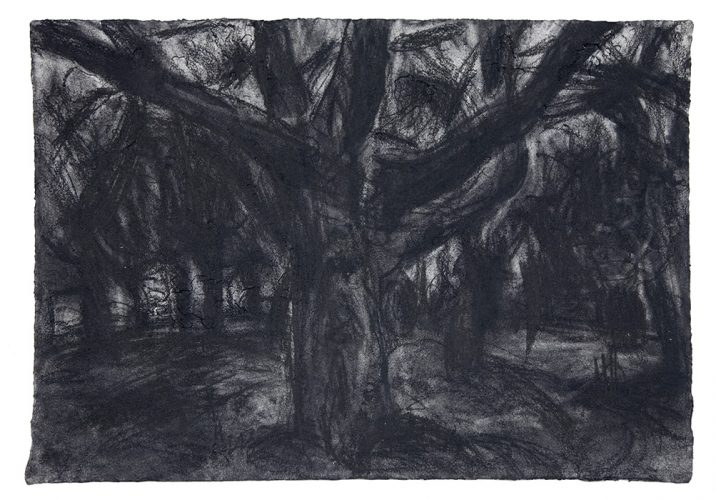 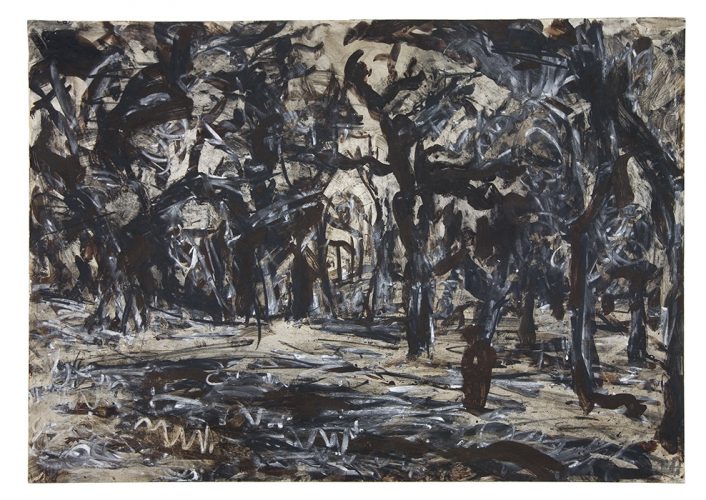 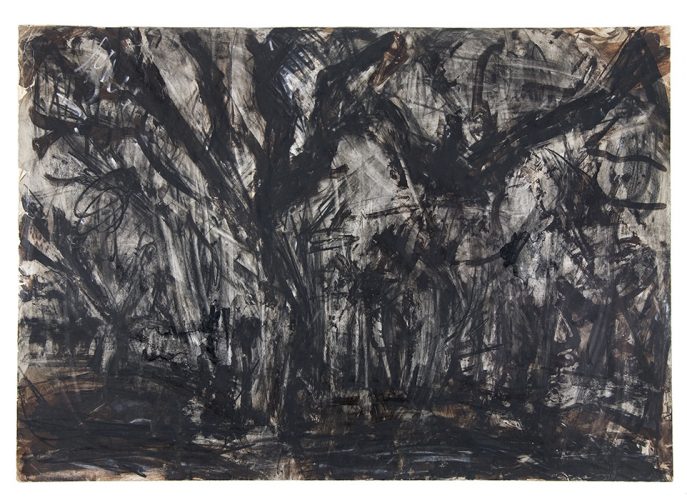 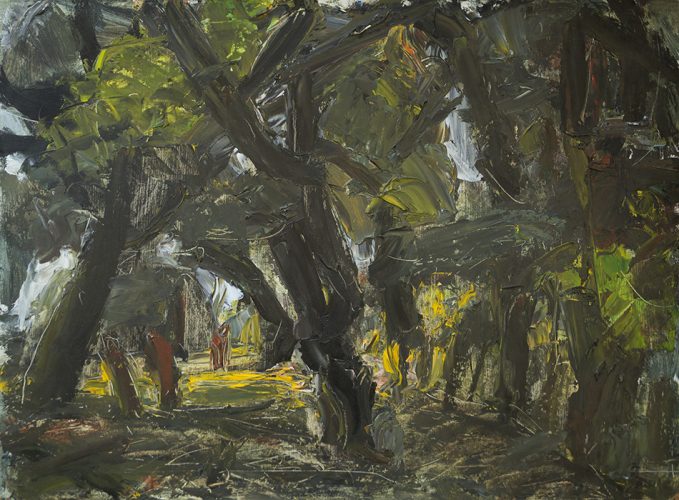 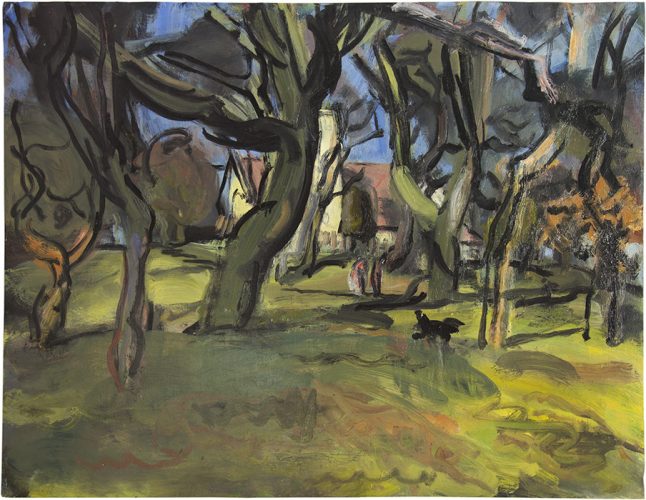 In the autumn of 1976 before painting One Tree Hill, I made a picture which I later called B.S.F. Landscape. I had found a good spot on One Tree Hill, just to the right of one of the cross paths under a tall poplar surrounded by bushes. I was looking east to where my path met the main track up the hill. It was a thrilling subject with tall, straight stemmed trees surrounded by may bushes and elder but sufficiently opened up by the people who used the park so that there were galleries of space lancing back in many directions. The bright sun penetrated the canopy to flare on a trunk here, a bush there, a patch of path, a reaching branch, a high clump of foliage, all making a mysterious and seemingly unpredictable pattern whose logic I slowly discovered as I began to understand the space and the distances. By now, liberated by my Dufy phase, my way of painting had moved on to something more personal where the drawing and colour were more integrated and with which I felt able to respond directly to both coloured light and space. I enjoyed working on this painting for some time but felt that I was miles short of doing justice to the wonderful subject and this dissatisfaction led me to more and more drastic measures. I swept a gallery of space through passages of painting with which I was very pleased or scraped with my palette knife to get a feel of the movement of the ground away and under the trees and bushes. I was on the trail of something faster and truer but the painting which had been luscious and beautiful was becoming a depressing mess. One day about six riders came along my little path on horses and ponies and rode into the space of my painting. This was so exciting and surprising, I had never seen horses in the park before, that I repainted the whole picture starting with them and reverted somewhat to my Dufy style. It was nearly good enough, but not quite, so I pressed on. I can’t remember much about finishing B.S.F. Landscape, other than a sense of failure, but later I recognised that something to do with the tree high above my head felt right for the first time and that I believed in a complete and surprisingly articulated space where heights were relatable to distances. I also remember feeling disappointed that the gorgeous play of coloured sunlight and shadow which had animated my painting early on was now no more than implied. This painting and two others made at the same time on One Tree Hill, were bought by Alistair McAlpine, a friend of Kingsley Amis, who gave them to The Contemporary Art Society. Some years later I found to my considerable surprise that they were in the Ben Uri collection. I would have loved to include this painting in this book but they seem to have mislaid it.

One day, a couple of years later, when the sun was not shining and I was looking for somewhere to draw, I discovered a subject that excited me very much. Just down from the top of the hill and above the church was a big old oak tree with a massive, conical trunk leaning up the hill. From low down a bough made a zigzag and then came out horizontally. Stationing myself just across the track from the large oak so that I was almost looking straight back along the horizontal bough, I could see to the left along the ridge of the hill past the big oak to another much straighter one and then at the end, may bushes at the park fence where the ground disappeared. To the right, I looked down the track to the bottom of the park on the south side. In the centre the bough led back to the big oak and two others making a row down the left of the track with the church set into the hill behind them. Cezanne once pointed to a saucepan on a shelf at eye level with its handle sticking out towards him and said ‘There, that is what drawing is all about.’ or somthing a bit like that, and the near branch of the oak tree was for me like that handle.

I made several large drawings and then started a three foot by four foot painting which was about my maximum size at that time. The subject was chosen more for its spatial content than for anything to do with the light and I think that I may even have painted it through different lights. I worked on it for quite a long time and experienced the usual highs and lows with a preponderance of lows. As writing this takes me back, I remember that this painting was started in grey light, never my choice, and that the absence of stimulating sunlight enabled me to respond very fully to the spatial experience. There were occasions when the sun did come out for a time and when this happened I grabbed at it, hoping that I might be able to finish the painting in the sun. I failed, and the painting followed the subject back into the grey light and, the excitement having passed, I returned to more sober and analytical painting until the now boring painting disgusted me and I found some drastic way to revitalise it and so, by the feedback process that is for me at the heart of painting, revitalise also my experience.

At the end of one miserable day’s painting, the low sun came through thrillingly and, as I was totally fed up, I crammed in the sun, knowing that it would probably be gone in minutes or even seconds. I remember scraping off wet paint and the critical sighting of the small amount of white left on my palette, then, finally, scratching in the fence as it climbed up the hill between the oaks and the church. I think that Frances came up onto the hill to meet me and help me carry my stuff back and that when she said that the painting was good, I was furious. I was disgusted with my painting and got quite angry. This is not an uncommon experience, the reason being, that a particularly good painting is likely to be, should be, particularly unrecognisable being something not seen or experienced before, so that the artist may see what it is not, and only later see what it is. Later I did realise that it was one of the best paintings I had ever made, which estimation was perhaps endorsed when it won second prize in the Spirit of London Exhibition in 1983

I sold One Tree Hill and then years later, when I got the chance, bought it back.