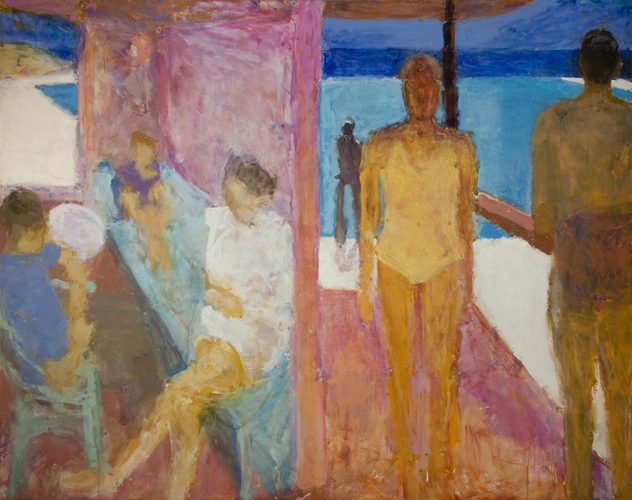 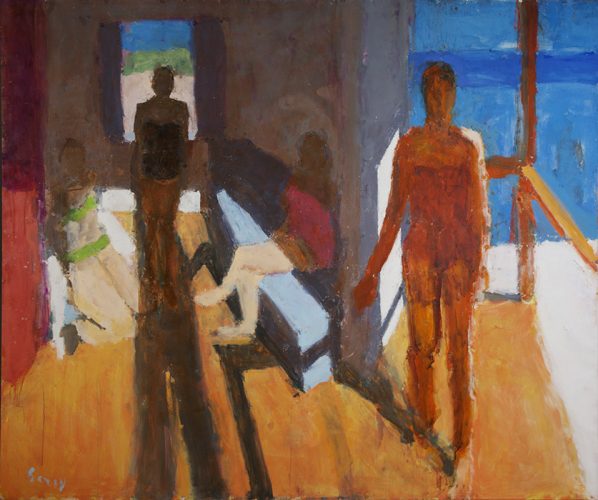 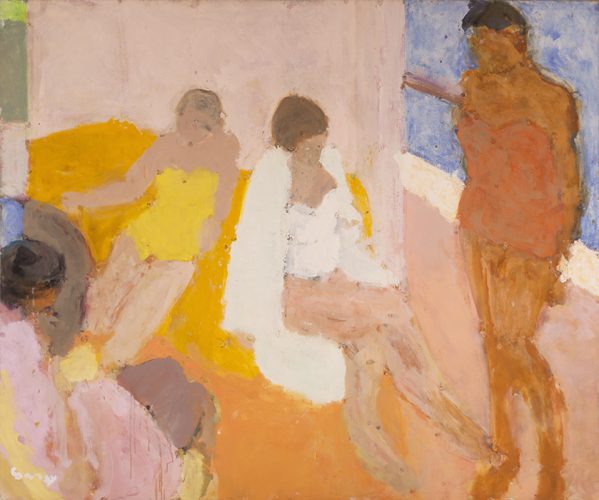 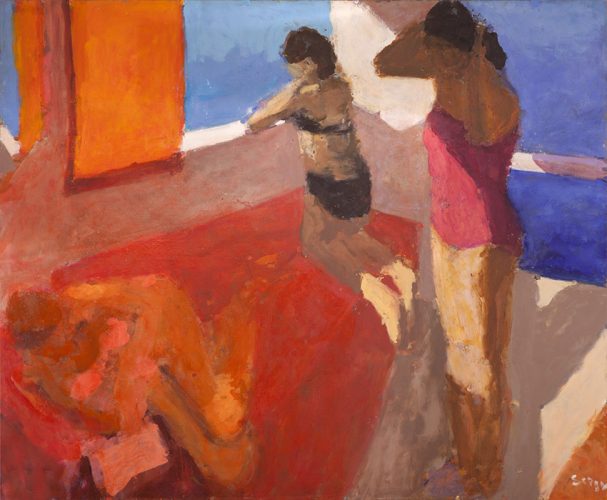 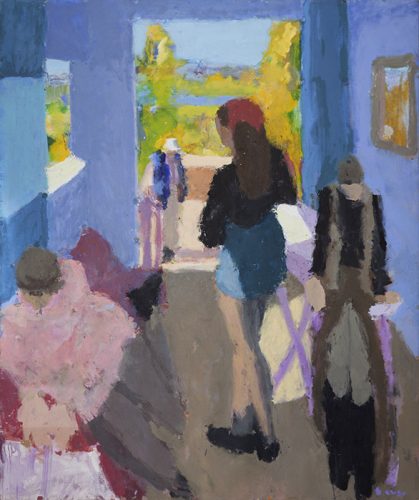 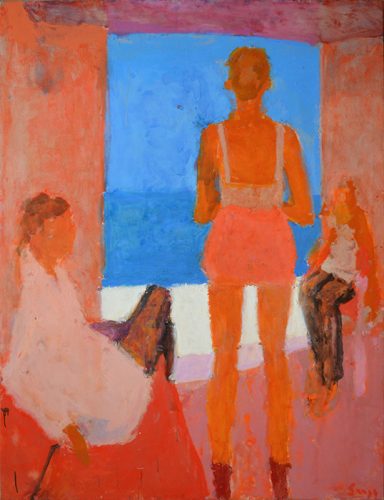 Sargy Mann in conversation with Peter Mann, 2013. This text was the introduction to Sargy’s 2013 exhibition at Cadogan Contemporary.

What I need to paint a picture is a real, physical subject external to myself. I have never been comfortable with the idea that I could just imagine everything. I suppose what I feel is that if I only used my imagination then I would be in danger of simply repeating myself. The thing about external reality is that it is always making demands on you, telling you things you don’t know and giving you problems you don’t know how to solve. It’s the excitement of discovering what reality, what the truth, is like, that drives me as a perceptual painter.

One day I was standing at the top of the stairs with my back to what had become known to us as ‘The little sitting room’ and I suddenly realized that there was something about the scale of the space I was in, the handrail and the stairs going down which was actually very like the terrace at Ma Roulotte in the Bonnard paintings. I had been to Ma Roulotte and spent hours looking at those paintings and I thought, well, I could imagine it was like that. Instead of the stairs going down into the kitchen with a wall at the end I could simply imagine that the wall wasn’t there. This space, which I had painted many times over the years, could become a new subject, with a landscape at the bottom of the stairs, possibly with a little river running through it.

I didn’t in fact make that painting but the moment was a very important one. It was a liberation to realize that I could make paintings about a very real space, with real figures, and a geometry, which I could feel, measure and try to understand, and then I could extend that to have a space beyond the figures, which was imaginary.

The particular space of the little sitting room was also very important. Why it really came into its own was its size. The way I find  I paint now is by arranging figures and objects in a space that at least in principle I can touch, and then that reality is my subject and I feel answerable to it. Everything in the little sitting room is within touching distance, either with my hands or sticks.

In almost all of the paintings I have made since going totally blind the picture plane has been at finger tip distance, what this means is that if I take a measurement from a figure at fingertip distance I can apply that measurement directly onto the canvas. I realized that within this small space I could have standing figures, sitting figures and lying figures all within touching distance. And this excited me.

The problem was what to have beyond the subject that I could touch. Whatever I invented had to integrate with the foreground space so that there was a believable light and space in the painting. Landscape is now literally out of reach to me and although I knew I could imagine a landscape I didn’t believe in my imagination enough to feel answerable to it in the way I knew I needed to in order to make a painting.

This problem in fact turned out to be a great opportunity.

Somehow the one landscape that I can completely imagine and feel utterly true to is water. I have never been a great fan of water as a physical reality in my life, I never sailed and I don’t like swimming much. But I love the visual qualities of water. I love reflections and I love the fact that water can look blue and therefore can bring large areas of blue into a painting. For a long time now I have wanted to use the full range of tone from white to black and a full range of colour intensity, I want to have a lot of saturated colours. But more than either of those things what I want is to paint a believable light and space. The challenge of making a believable light and space with very saturated colour is something that has been one of the main driving forces for me in all of my painting life.

So the little sitting room had become a sort of bathing hut by the sea. When I have Frances posing for me then I am almost exclusively concerned with drawing, understanding the form and the way it occupies the space and refers to other figures in that space. Of course sometimes I am also thinking about the light I have imagined and how that light is falling on the figure. And then there are times I just stand in that room and try more to imagine the space I have imagined in the painting, that I am standing in a little bathing hut with the sea out there, a bit of landscape through the window, the sun behind me casting my shadow across the floor in front of me. Where I am, what’s going on in my imagination is different at different times. I would like to be able to imagine the whole subject at all times and only take decisions about parts from that total experience, but I can’t do that, its too difficult.

In the past I was always scared of painting figures, I always felt more relaxed in a landscape than in the company of people but through blindness the presence of people and the immediacy of them is so essential to my existence that I have had to embrace them more.

I think that the problems of making pictures now that I am blind, both in terms of the sheer physical problems of negotiating the canvas and mixing colour and the imaginative problems to do with finding a subject have made demands on more of my nature and the whole of who I am than was the case before. I think it could be that in a strange way there is more of me in my paintings now than there was when I could see.

The upstairs interior of the artist’s house in Bungay and the stairs leading to it have been the setting for two other significant groups of paintings which can be seen here.

The painting ‘Infinity Pool II’ was featured in the exhibition ‘Sargy Mann / Euan Uglow’ at The Collection, Lincoln 2016/17