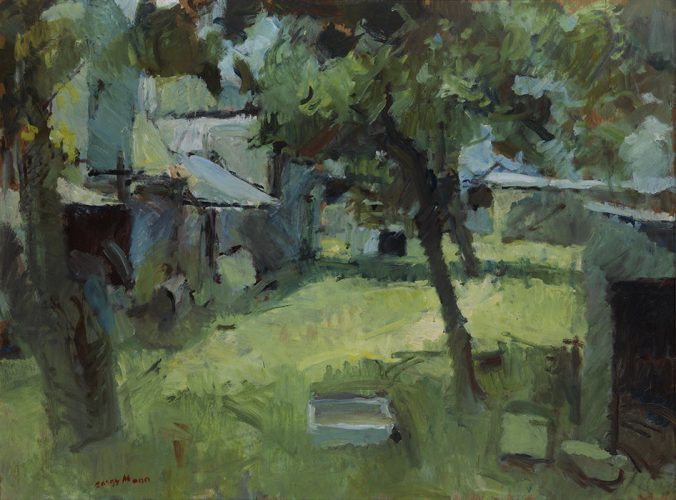 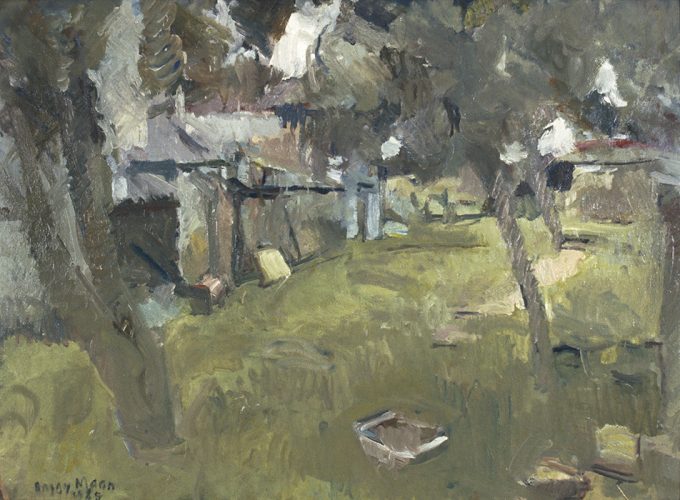 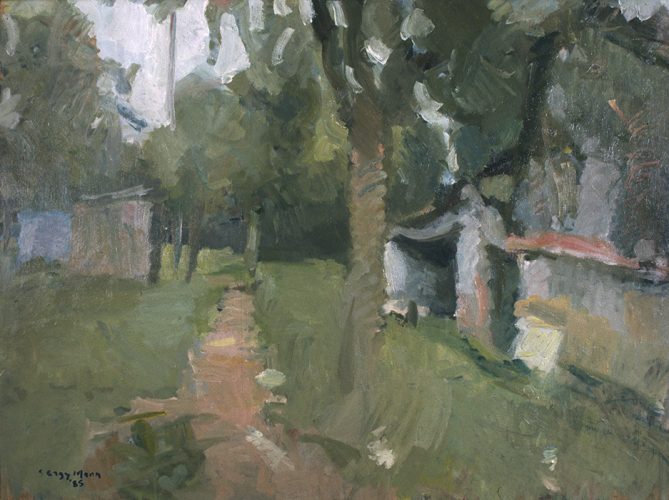 The painting ‘Grey Morning in a Devon Orchard’ won the 1988 Spirit of London prize. You can see a short Thames News report here.

London, as I have said, is not the ideal place for a landscape painter to live, but it is full of parks and these, together with gardens, our own and those of friends within walking distance were where I painted. I never learnt to drive which meant that I pretty well always painted within walking distance of where I lived or could keep my painting and gear. In the early years of our marriage, where we went on holiday was determined not so much by where we wanted to paint but by which friends or relations could put us up. Having found myself somewhere I would then walk about looking for subjects. If I decided only to paint a sketch box size, then I might explore quite far afield and the larger the painting I wanted to make, the nearer to base I would have to work, though I did get pretty good at carrying four foot by five foot sheets of plywood about on my back.

In the summers of 1984 and 1985 we rented for the first time, a semi-derelict farm cottage in South Devon near Crediton. The farmer we rented it from had bought several farms in the area for the land and used to rent out the farm houses and cottages to Exeter University students during term time, which added considerably to their dereliction. By now I was seeing pretty badly and I remember being just able to play a sort of cricket with my five year old son Peter and his six year old sister Charlotte and my wife, we also had Susanna who was two. The field next to our cottage had only a narrow strip of flat ground before it went rocketing down a steep hill to a little river, so that any sort of a cut or cover drive resulted in a long track for the ball. I find it very hard now to remember how badly I was seeing in the past. Compared with what came later it always seems that I was seeing really quite well, but at the time this was the worst my sight had ever been. I also find it particularly hard to remember what my everyday seeing was like as distinct from how it was when I was painting, which I can remember more easily. My paintings don’t reflect in a straightforward way how I was seeing; people looking at my paintings always think that I was seeing far more normally than was the case. Seeing is subjective, you see in your brain, and I always saw at my best when I was painting.

A short walk from our cottage were two empty farms with wonderful outhouses and these were where I did most of my painting the first year. Perhaps half a mile along the road in the opposite direction was a small mixed farm of great but somewhat dilapidated character which was worked by two brothers called Cheriton, charming shy people, one with an equally charming wife. A path down the side of their farmhouse led through a gate into a scruffy orchard with a cinder path which ran along the back of the house and adjoining barns to the farmyard. I painted three pictures from just inside the gate looking down the path. There was an apple tree near to on the left then a small pear I think, a little further down on the right next to a shed for turkey chicks, then another apple on the left with a low branch across the path that you had to duck under. In a slight trough against the back of the house behind the apples was a beautiful stand of stinging nettles and further than the apples, just to the left of the track was an enormous metal tank on its side presenting me with the pure rectangular black shape of its opening which related to more distant, larger, less dark openings of barns in the farmyard. It was the sort of subject I loved where the big space was articulated surprisingly but clearly, in height as well as distance such that the three dimensional experience had a sort of unintended and natural drama which seemed to want to translate into two dimensional design, and the working out of that design intensified my experience and comprehension of the three dimensional reality. There was a lot of human stuff too, which I felt and enjoyed but didn’t want to think about; the visual evidence of human lives and nature co-existing, a particularly poignant example of which being an apple branch you had to duck low under, the farmer we rented the cottage from would certainly have cut that branch off. Having said that, though, after I had been painting there for a couple of weeks I turned up to paint one morning and found that my beautiful nettles along the back of the house had been laid low by the scythe as had all the rest of the nettles and thistles that I had been so enjoying trying to paint. As I stood there horrified, the farmer appeared from behind me with his scythe over his shoulder and said with cheery pride, ‘I thought it was about time I tidied it up a bit for you’. What it did mean though, was that we found a cow’s skull which is now in my studio.

I have referred to different phases of my development naming the artist or artists I was primarily influenced by or thinking about at the time: Uglow and Auerbach, Matisse, Monet, Dufy, and in the case of the little painting of poppies, my great friend Dick Lee who was never far from my thoughts. I have always detested the idea of style as something you choose and felt that style was how you turned out to have done it and should only be talked about retrospectively if a tall. These labels such as, my Dufy style, were used self-mockingly though they do serve quite well to identify different periods of my painting. However, for all that I was opposed to the idea of style, I knew that figurative painting, the only kind that I wanted to make, achieved figuration by means of some sort of pictorial convention and that although it was a condition of being any good that one arrived at one’s own necessary way of painting, nonetheless there were different conventions that had been employed at different times and by different artists and which were in some respects mutually exclusive. So there had to be some sort of choosing of how one was going to proceed even if one might change one’s way of doing it mid-way through making a painting. This dilemma of how to choose a figurative convention or pictorial language, but not choose a style has troubled me ever since my student days and was only really resolved when my sight became so bad that all my thought and energy had to go into doing anything at all that made sense. The only test has always been, what seems most true at the time; different ways of drawing and using colour seem most true at different times.

How close my painting has been to the pattern of appearance is something that has swung this way and that and in the Cheriton’s orchard I found myself returning to something closer to apppearance and it felt good and true. In this mood I also felt with pleasure the hovering presence of Dick Lee and behind and above him, Corot and Pisarro but also Cezanne for once seeming a little more approachable. It was more to do with colour than drawing. I love two things, essentially related for my sort of figurative painting, the light I experience and the colour of my pigment spread on my board or canvas; the first must give rise to the second, the second must re-create the first. My love of pigment colour is such that I usually only feel fully engaged, fully alive when I am using pretty saturated colour and this has led me to chose subjects with very intense light as I suspect it did, Turner, Van Gogh, Monet often, Matisse, and Bonnard. But sometimes as in the Cheriton’s orchard, I found myself fully turned on by the subtleties of unsaturated colour and loving the grey greens and grey pinks and grey blues and all the other unsaturated colours that I saw and mixed on my palette. I had no desire to transpose my experience such as to demand the use of strong colour. On this occasion I felt in harmony with things just as they were and painting felt quiet and true day after day.